Just added to your cart

I'm really happy with this purchase! Very sturdy and it was fairly easy to put together. The desk came incredibly quickly and was handled with obvious care. In terms of a product, it continues to be very sturdy, and the multiple places to organize wiring proved to be much more helpful than I originally expected. With regards to the desk as an item, it has delivered on every front.

The only "issue" arose in assembly. Unlike other Ergo and Eureka desks, this particular model did not have any assembly guides easily accessed online. Normally this wouldn't be an issue, but around halfway through the assembly procedure there was a step that continues to confuse me. Two small metal bars must be placed inside the greater metal bars to initiate support between the two sides of the desk: however, instead of these smaller bars being secured with screws threaded through treads, the instruction pamphlet directs you to screw flat screws directly through the greater bars and into the smaller connecting bars at a 90 degree angle. Obviously the desk is held sturdy by much more than this specific area, but it still confuses me to no end. My desk permanently has 8 screws sticking half-out in the center of the desk's underside, and presumably this is the intended design. No other screws were provided, no treads to lower the screws into a more sturdy hold on the smaller bars were made, and no instruction outside of "screw into metal" were provided. This doesn't really take away from the function of the desk, aside from maybe making a risk of slamming your knee against exposed screws if you're freakishly tall, but it was an incredibly confusing step in the instructions and had me scouring the internet to no avail for hours, because it seemed so nonsensical I thought I must have been doing it wrong.

Also, if you plan to use this desk without the giant mousepad, be forewarned: the mousepad exists mostly to cover up the join between the left and right sections of the desk, and looks pretty jarring without being covered up. Just assembled the desk and used it today for the first time. Directions were very well described and clear. Parts were organized and labeled. Any clarification needed came from the on line videos provided by the manufacturer. The mechanism to raise/lower is very smooth. I did this multiple times today. This is perfect for the small space I have. The desk is very sturdy and I have no worries about it lasting a very long time. This desk is very spacious... fits all of my devices...

Comes in 2 boxes... Very easy assembly Hand crank is very Easy to use... Nice desk. Sturdy, raises and lowers like it’s supposed to. Looks great in my new home office! The only downside is the memory function doesn’t retain the height when I set it. 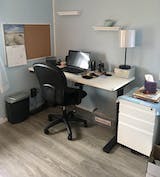 You need to do a better job with the screw holes and connecting then, just kind of weak how they get screwed in. The chair is comfortable, but the seat isnt that wide, and I like how my iComfort 5000 is and it has the padded arms as well. I know its more ergo and its cool the arms can easily turn, but also connecting the head rest with the screws in that, was a pain in the butt and so annoying, just make with longer screws then. Decent chair but shouldnt be at that price point This standing desk is better than I even imagined. It's perfect for my L-shaped desk since I sit right in the corner. It fits both my laptop and desk monitor with room to spare. A couple of coworkers have already inquired as to where I got and I recommended Ergo. It raises up and down with ease. The keyboard section is a bit tight for mine but still fits. I would highly recommend ordering from Ergo, they are affordable and make excellent products and shipping was painless. It was easy to put together too, just needed a Phillips head screwdriver. 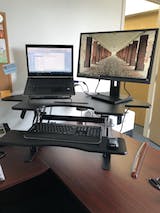 I was looking for a sit/stand to fit a small space. Found this 43” which would be perfect but they were out of stock. I reached out to support and they were able to help me find what needed and I received it within the week. Overall the product was good quality and relatively easy to put together. Glad I found this site. I had great customer service and got exactly what I needed. I’ve long used a standing desk and often had a backache and general body fatigue after a long day on my feet. This mat provides excellent support. Wish I had purchased it sooner!

Super fast service from Ergo Standing DeskS despite shipping during the peak of COVID-19. I had wanted another product that turned out to be unavailable due to a warehouse being closed, and their team let me know right away. Very much appreciate the attentive customer service! Quality product for a low price. Does what it's intended to do. Would purchase again. A must-have! No more tired legs

A
Mount-It Medium Anti-Fatique Standing Desk Comfort Floor Mat A.
Like it

Actually really like it. Amazing how less fatigued one feels while doing food preparation or doing dishes. After standing as a teacher all day it's nice to have a break doing the home chores

Quality product for a low price. Does what it's intended to do. Would purchase again.

Fast delivery. Works great for keeping CPU off the floor and out of the way. K
Mount-It Under Desk Mount CPU Tower Holder K.
Needed a stand to get my machine off the carpet

Needed a stand to get my machine off the carpeted floor and allow for cooling beneath. This one does exactly what it is supposed to do. Delivery was quick and price was more than reasonable.

This is very helpful at work for support Fits perfectly under my desk. Along with my new chair, this keeps me in the right position and my back feels great.

R
Mount-It Adjustable Height & Angle Ergonomic Foot Rest R.
Now we both have one and both love it

I bought this for myself and the day I got it, my significant other stole it and told me to order another. Now we both have one and both love it, haha

These are very effective and a good value. Easy to assemble and came with a good selection of alternate mountings and screws for a variety of monitors and their backings. Took away one star because the joints were seriously hard to tighten or loosen in some spots. That said, once I was able to position in a way I liked, they look and work great. I had 1 mounted monitor and two on stands, but limited desk space. This was an excellent solution. Very happy! Product was as depicted and supported the LED monitor without any issues. To tighten the mounting did require more effort than expected but would recommend for cost effective stand. j
Mount-It Freestanding Adjustable Single Monitor Desk Stand j.
Although the product does what it's supposed to

Although the product does what it's supposed to, one must handle the monitor very carefully. Took me a while to tightened it enough for it to hold my 32 inch without sliding down.